Hundreds of developers packed the Las Vegas Venetian hotel in October to compete in the Money 20/20 Hackathon. Stakes were high as developers battled for thousands in cash prizes displaying their skills using APIs and SDKs to build innovative payments and Fintech solutions.

As one of the sponsors, Visa Developer provided tools and support to help teams win, big. 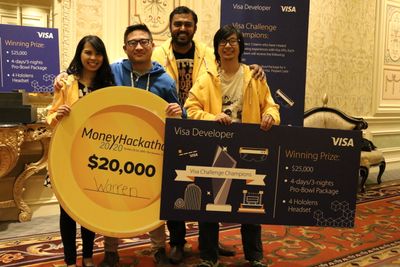 Team Warren with their check!

Team Warren was one of the two teams to win the Visa Developer Challenge and were amongst the top five Money20/20 winning teams. The team built: Warren, your very own personal investment advisor delivered through Alexa using the Visa Direct API. Warren connects to various sources of information for social data, financial data, market news and ticker data and uses the Visa Direct API to connect financial institutions, enabling users to move money between their accounts.

Q: How did your team meet?

A: “We all work together at Symphony Commerce, an e-commerce platform provider. The company encourages people to go to hackathons and be creative as developers. The majority of the team formed three years back. We participated in a few hackathons in SF and won a few prizes that we only dreamed of winning at that point, so we started calling ourselves the "Dream Team". We decided to take it up a notch and try our first out of city hackathon and went to the Money20/20 hackathon.”

Q: How did you come up with the idea?

A: “To make an informed decision, we started by looking at the sponsors and their APIs. We realized that there was a bias for hardware and we had never done anything with hardware, so we thought it would be a fun challenge. Eventually, we decided to use Alexa. Considering how personal and easy to use the interface is, we thought it would be a really cool way to access financial data and would additionally be easily demo-able. We walked in with an idea that a general financial advisor would be an incredibly useful tool and could do well at Money20/20. However, after pitching the idea to Visa's support team and getting feedback, we realized that it would be a more compelling story to narrow our focus on a particular aspect of the financial adviser. We decided that the investment adviser was the most appealing to us, as it would also be a useful tool in our own lives. “ 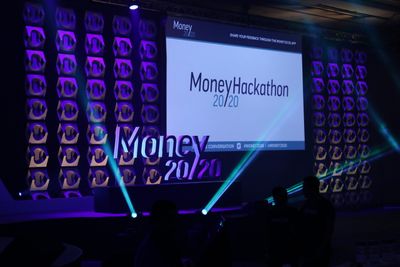 Team Warren said at first they thought that an investment advisor would be the direction the idea would take but after talking to Visa support on-site they decided to focus it more on Investment.

Q: Who do you think is the target audience?

A: “The target audience is the busy professional who wants to invest and plan for the future but doesn't know how to or what options are available for them. It would make a lot of sense for banks to integrate this because they would generate transactions and help their customers achieve their financial goals. ”

Q: What do you think is next for the app?

A: “There are countless improvements we can make to Warren's AI. For example, we could leverage sentiment analysis of news stories and reports to give advice on good stock trades to make. It could eventually understand industry situations and find patterns that would advise on whether someone should take advantage of a stock or not. We would also make sure to further personalize Warren, allowing it to make decisions that are best for the user's age, stage in life, and financial situation.”

The team used Visa Direct APIs to be able to transfer money from people’s account, between institutions

Q: What was it like working with the Visa team and Visa Developer Platform?

A: “We enjoyed working with the API - the descriptions were well written and complete. The on-site support was incredible. We have never seen such a big turnout from a sponsor at a hackathon. It was quite a sight! An army of Visa engineers and product managers were available to help hackathoners integrate the Visa API into their applications and get advice on how to improve their ideas. It was an incredibly smart move on Visa's part. At hackathons, sponsors generally only send a handful of engineers to help hackathoners, so there is sometimes a long wait to get help from a popular sponsor. In this case, there was never a wait time to get help on any aspect of the hackathon, convincing more hackathoners to choose to integrate with Visa.

Despite how hazy we were by the end of this sleepless hackathon, we remember hanging out with everyone from the Visa Developer team. It was a lot of fun. Although they were sponsor representatives, it really felt like they were also a part of Team Warren.” 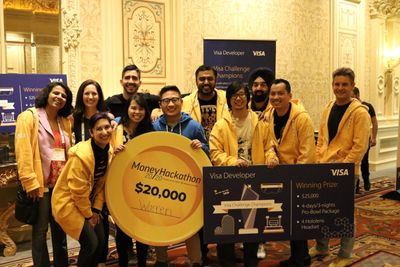 Collectively the team walked away with $45,000 for their idea, plus a trip to Orlando and a Hololens for each team member. Watch Team Warren demo their app on the Money 20/20 stage here.